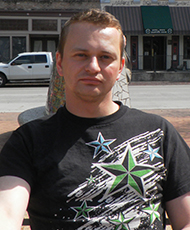 Dr Jakub Kościółek – A graduate of cultural studies, Middle Eastern studies and Ukrainian studies at the Jagiellonian University. Author of the book Conflict in Darfur (2010), co-editor of Problems of modern Africa. Opportunities and challenges for the future (with: K. Jarecka-Stępień, 2012), editor of the report: Hate speech in public space. Report on press research in 2014 (2015). As a Fulbright scholarship winner he spent an academic year at The George Washinton University in Washington (2013/2014). Dr Kościółek is the President of the INTERKULTURALNI PL Association, which aims at supporting migrants in Poland. He teaches: Contemporary Ethnic Relations, Interculturalism in Africa, Criminal Aspects of Intercultural Relations, Contemporary Ethnic Conflicts in Africa and Asia. He is currently preparing a publication on US policy on genocide in Africa and is conducting research on sexuality in African cultures.